The Congressional Restoration of Fulbright Funding

via The Alliance for International Exchange

Earlier this morning the House passed a third continuing resolution (CR) to extend government funding for an additional six days through Dec. 22, CQ reports. The Senate is expected to vote on the CR today, and if passed, the CR will give lawmakers more time to pass the FY16 omnibus bill since the short-term CR passed last Friday (Dec. 11) is set to expire at midnight tonight.

The omnibus further stipulates that the Congress-Bundestag Youth Exchange (CBYX) program receive at least $4 million in FY16. This language is consistent with House and Senate bills earlier this year, in response to a proposed 50 per cent funding cut to the program by the State Department earlier this year (the Alliance reported). The bill additionally contains language reinstating seafood processing placements for the J-1 Summer Work Travel program (page 1146-47 full bill text).

A chart outlining State Department exchange program funding levels provided by the omnibus can be found in the bill report language here (pages 8-9).

Congress is expected to pass the omnibus this week, according to CQ, “but extending the funding [with a CR] into next week gives lawmakers ample breathing room if progress is delayed.”

The Senate bill specifically requests no less than $236 million for the Fulbright Program, the same level as in FY15. The bill also requests notification if the State Department intends to make any substantive changes to funding for existing programs:

“Provided further, that any substantive modifications from the prior fiscal year to programs funded by this Act under this heading shall be subject to prior consultation with, and the regular notification procedures of, the Committees on Appropriations.”

The accompanying report includes language to address funding for both the Congress-Bundestag Youth Exchange Program and Young Leaders Initiative:

“The Committee is concerned with the Department of State decision to reduce funding by $2,000,000 for the Congress-Bundestag Youth Exchange Program in fiscal year 2015, and recommends $4,000,000 for the program to avoid such a reduction in fiscal year 2016.” “Funding for the Young Leaders Initiative shall be made available on a cost-matching basis, and the Committee expects that additional funds for this program will be raised from private sources. The Secretary of State is directed to consult with the Committee on a sustainable funding mechanism for these programs.”

During the committee mark-up, Senator Patrick Leahy (D-VT) offered an amendment to increase spending to the President’s request level. Leahy also highlighted exchanges, particularly the Fulbright program, as an area that suffers when spending decisions are made under “austere spending caps.” Though the amendment failed, Committee Chairman Lindsey Graham (R-SC) expressed support for increased funding if a broader agreement can be reached “outside this committee.”

The legislation was approved 27-3 and is now available for consideration by the full Senate.

“The Committee directs the Department of State to inform the Committee in a timely manner of any instances of coercion, exploitation, or other abuse associated with the Summer Work Travel and high school exchange programs.

“A provision under this heading in the act permits participants in the Summer Work Travel program to be employed in seafood processing positions until September 30, 2016, if such placements comply with all requirements of the program. As with other positions, Summer Work Travel sponsors shall, upon request, provide evidence to the Department of State that such requirements are being met for seafood processing positions, and failure to provide such evidence will justify a compliance review of the sponsor.”

Details of the President’s FY16 budget request include (also see the chart below):

President Obama signed the 2015 federal budget into law that not only fully restored Fulbright funding at its previous 2014 levels but also increased it by $1.8 million to $236,485,000.

Educational and cultural exchange programs are funded at $589.9 million in the FY15 omnibus appropriations bill released last night and expected to be voted on by both Chambers of Congress this week. This funding amount is $12 million more than the President’s FY15 request of $577.9 million and $21.2 million more than the FY14 enacted level of $568.6 million. The FY15 omnibus also contains increases over the FY14 level for every specified program, including: 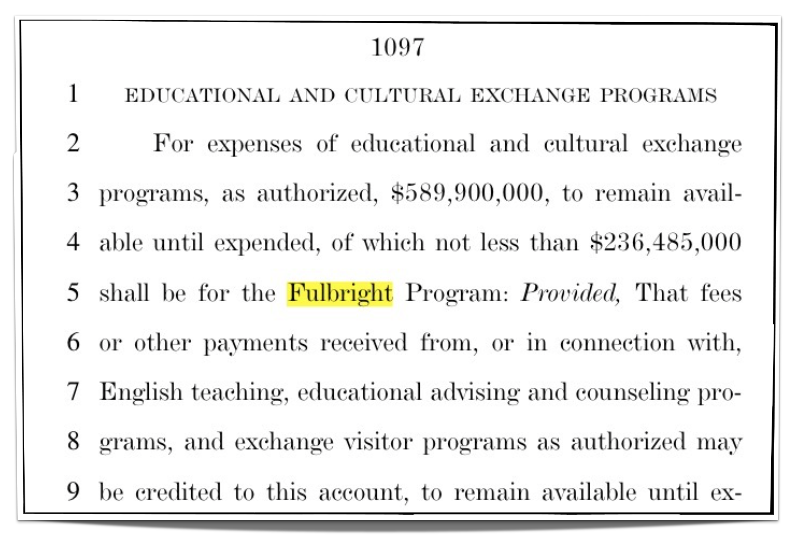 A top-level chart of Department of State exchange program funding levels can be found here (pages 6-7).

“Provided further, That a portion of the Fulbright awards from the Eurasia and Central Asia regions shall be designated as Edmund S. Muskie Fellowships, following consultation with the Committees on Appropriations:

“Provided further, That any further substantive modifications to programs funded by this Act under this heading shall be subject to prior consultation with, and the regular notification procedures of, the Committees on Appropriations.”